Football across the world has to take a back seat for the next few years as war rages across Europe, and the little village of Fivemiletown is no exception.

Why did so many volunteer?

There were many reasons why men joined the British armed forces between 1914 and 1916. During this period it was voluntary but after 1916 conscription was introduced, but Ireland, which was part of the United Kingdom at the time, was excluded from the scheme and yet 63,000 men joined

On the first day of the war in 1914, British newspapers published appeals for young men to join the colours, and to fight against Germany. 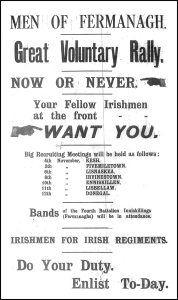 There was a huge recruiting campaign, led by newspaper advertisements, and supported by posters, including this half page ad in the Impartial Reporter dated November 1915

Meetings were held in every town and village where politicians, priests, and local worthies exhorted men to do their patriotic duty.

In November 1914 only a few months after the war had been declared the local paper branded the local football committee as cowards for not enlisting at the outset and called for conscription.

"Most people have been disgusted with the thousands of young men, well able to join the army, who continue to play association football.
The rugby games have long been abandoned, as the rugby men have volunteered for the army in large numbers; but the association men are of the same kidney as our own firesiders.
There is a cry, therefore, for the suppression of all football until the war be over, or better still until the government introduces the conscription so badly needed. There are many classes who object on principle to entering the army – Quakers, Plymouth Brethren, and some other bodies. There are others who have on such objection if there were no war, and who are arrant cowards, and we have plenty of cowards in the country.
If then, conscription were introduced, all classes would be compelled to serve, and the burden would be equally distributed: but at present, the best of the manhood of the country is upholding the country, while the poltroons and cowards remain at home, objects of derision."

On St Patrick’s Day 1915, Fivemiletown football team travelled to Brookeborough to take on the local team, this apparently was a return friendly, so there was some football being played.
The report said the 'match was very exciting throughout' and at half time Brookeborough led by three goals to two.
It went on to say that 'Fivemiletown completely overcame their opponents in the second half' and at full time the score was
Fivemiletown eight goals, Brookeborough three goals.
It unfortunately never mentioned any of the players by name. In March 1916 one of the founder members of Fivemiletown football club ‘Archibald Montgomery’ son of Mr. Hugh de Fellenberg Montgomery of Blessingbourne, was promoted to Major-General. In June 1916 the Impartial Reporter published a letter that had been sent to them from the front lines in France; the opening lines said;

Dear Sir,
I am sending you a report of a football match which took place here a few days ago. Will you kindly insert it in the next week’s Impartial Reporter.  I may say I get a copy from home every week and how the Clogher, Augher and Fivemiletown boys gather around me on its arrival.

The report he sent was a match between teams representing Clogher and Augher.
I would imagine there would have been more than one player from Fivemiletown competing in this match, but I am unable to confirm this, all I have is a list of names of those who took part;
Representing Clogher - J. Bennet,  J. Roberts, W. Neely, A.M. Steen, J. Magee, C. Rooney, J. McGoff, J.Ganit, J. Howard, B. Hamilton, J. McDonnell.
Representing Augher – T. Jess, J. Burns, J. Steen, W. McDonald, W. Osborne, A. Mossey, H. McMaster, C. Johnstone, H. Mossey, A. Lamont, T. Dickson.

Clogher winning one goal to nil.

Back home later the same year, a sports meeting was held at Aughertaine Castle, in ‘aid of the funds for the benefit of wounded soldiers.’ With over 500 people turning up to the event it ‘proved a very gratifying success.’