I have searched through three papers circulating in Fermanagh in the 1912/13 season, The Impartial Reporter, The Fermanagh Times and The Fermanagh Herald. And it seems to be a quite year, not just for Fivemiletown Football but for sport in general, with very little mention of the beautiful game.

There was so little mentioned, that an article appeared in the Fermanagh Times in November with the title… ‘Is Local Football Dead?’  It called for the surrounding towns (Fivemiletown Included) to get their act together for the sake of the game.

In the same paper it was reported ‘the interest amongst footballers at Fivemiletown is about to be renewed within the next few weeks.’ It went on to say ‘The club here has long maintained its good reputation in local football circles, and admirers of the game anticipate another successful season during the coming months.’


Throughout this season I found the lack of match reports very frustrating, and what was sent to the papers was very brief and to the point, with very little details. Within two weeks the ‘Town’ had their first game of the season with a visit from Irvinestown Wanderers. With little, if any, preparation I am not surprised they lost 3-0
The Wanderers showed themselves to be the superior team in the second half putting three past the home keeper, the report said; ‘Messrs. Tom Martin, John M’Geady and John M’Gloughlin were decidedly the better of the home team, but all suffered from a want of practice.’

The following week Fivemiletown travelled to Enniskillen to take on the Special Reserves winning by three goals to two.

The next report I found read; ‘Fivemiletown Football team defeated by six goals to one the Fusiliers from Enniskillen on Saturday, in the Mercer Cup. The match was played on the winners ground, and the latter had the best of the play throughout the game, and the addition of a few new players was a decided improvement to the prestige of the home eleven.

Fivemiletown then did the double over the Special Reserves by beating them five goals to two. 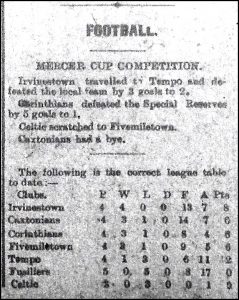 This is the only record of the league tables for this season I have found to date, as you can see there are only seven teams entered this year.

Boxing Day in Fivemiletown seen a couple of matches taking place, firstly there was a Mercer League game with the Enniskillen Fusiliers visiting the town, easily defeating them, four goals to one.
The other game was a match between The Red Diamonds (Fivemiletown Juniors) and Aughnacloy 2nd eleven with the only goal of the game scored by the visitors.

Three days later Fivemiletown travelled to Tempo defeating them by four goals to three in this league fixture.

Into 1913 and at the end of January the Fermanagh Times reported;
‘One of the best matches of the season in connection with the Mercer Cup competition was witnessed on Saturday between Fivemiletown and Caxtonians (Enniskillen) on the former's ground.
After a strenuous game, the home team came out on top by the odd goal in three.'
Not a very comprehensive report for one of the best games of the season…

Fivemiletown welcomed Tempo in the return game, with the papers reporting ‘That both teams gave a good account of themselves, with a fast and interesting game’ the game finished a draw of two goals each.

The last competitive game I can find involving Fivemiletown was a few lines in the Impartial Reporter in late February, it said;
‘Newtownbutler travelled to Fivemiletown on Saturday and met the Fivemiletown eleven in the Mulhern Cup. The game was fast and exciting, and resulted in a win for the homesters by a score of two goals to nil’
This is the only mention of the Mulhern Cup I came across all season; I do know that Enniskillen Caxtonians went on to lift the cup. In March of this year, Fivemiletown Junior eleven played a return game against Aughnacloy, they were beaten 3-1.

I found an interesting little match report involving a team called Cess Rovers coming to Fivemiletown to play a friendly match against Fivemiletown Strollers, a very brisk and exciting game, so the papers said, resulting in the Strollers winning by two goals to one.

And Finally
If you wanted the latest bike, look no further 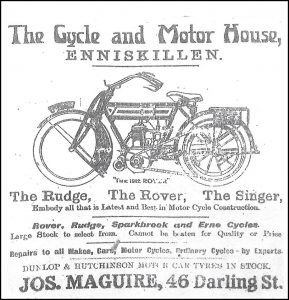