The Fermanagh Times published an article in November 1911:

‘The football enthusiast seems to have re-awakened in Fivemiletown, and it would not be a very rash prophecy to say that he will be heard of to his advantage during the coming season.
Some years ago Fivemiletown FC was a very hard nut to crack. They were a very strong combination and many were the teams who felt the pangs of defeat at their hand – or feet. This year history promises to repeat itself and once again it is very probable Fivemiletown will prove stout antagonist and, perhaps, an insurmountable stumbling block to many teams in the North-West.’
As I read this statement, I get the impression that the club has been laying idle for a while, but once again, restarted with a good deal of enthusiasm, It also said ‘There a was a well-attended meeting of supporters’
But the article went on to say ‘The secretary’s and the treasurers' reports were then read and adopted. It was pleasing to see the treasurer’s report showed that there was a substantial balance to the credit of the club.’  This paragraph makes me think that the club has, if fact, been running for at least the previous season, although at the time of writing I did not find any mention of them.

Subscriptions
It also reported on the year's membership fees;
‘The minimum subscription to become a member of the club was fixed at 2s 6d and this entitled the subscriber a card of membership which would admit him to all matches free of cost, except those played on Easter Monday and Boxing day.’

That's about £20 in today’s money, something similar being charged in 2017.

Mercer Cup
The first match I found was the opening game in the Mercer cup (League), this was played in Fivemiletown when the Cavan Fusiliers came to town.
The visitors out-classed Fivemiletown, beating the home team by 5 goals to two, with the paper commenting that, ‘lack of practice’ and ‘combined with the absence of a few of their best players’ as the reason they never played well.

The following week Fivemiletown seems to have been strengthened when they travelled to play the Corinthians in Enniskillen in the Mercer cup.
It says the play during the first half was evenly contested; there were dangerous onslaughts being made by both sides. Late in the first half, the Corinthians succeeded in ‘scuffing the ball’ over the line. At the restart, Fivemiletown made ‘Continued and dangerous attacks on the Corinthians goal, exhibiting continual and combined sterling play.’  Finally ‘After incessant and united efforts the leather was steadily placed in the homesters net’, leaving both teams equal. The report went on to say ‘The man between the posts (Corinthians) undoubtedly saved the position of the home team in the latter parts of the game. He is worthy of a mention for his successful efforts against the unceasing stingers so competently directed between the posts.’

Next up was a visit by the Scotch Fusiliers, reporting the ground was in excellent condition and the weather was ideal, Fivemiletown soon scored the first goal and seemed to be in charge of things but luck was not with them and, with about fifteen minutes remaining, the report went on to say; ‘The home team proved the better of the two until nearing the finish of the game, and were evidently confident of notching two points to their credit. However, Dame Fortune seemed to favour the soldiers, who were awarded a penalty, which they stole a point from their opponents. This apparently discouraged the homesters, who relaxed their dangerous onslaughts, and somewhat lost their equilibrium, and in the heat of excitement, the Fusiliers snatched the remaining point much to the surprise of both players and spectators.' Fivemiletown pushed hard for the equaliser but to no avail. Fivemiletown 1: Scotch Fusiliers 2
In another paper reporting on the same match, it gave these words of advice; ‘It is a bad thing for a player to criticise on the field. In this time of life, a man can really only attend to one thing at a time, and he cannot play football and at the same time criticise audibly the actions of either the referee or another player – that if he wants his team to win.’  They have a point. 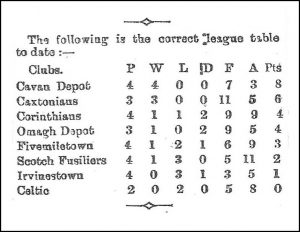 The 'Towns' first win this season came away at Irvinestown, winning by two goals to one, the short report said; 'Irvinestown had hard lines, as they had, on the whole, the best of the play.'

The football club put this item in the papers in the run up to Christmas:

This season's Boxing Day match was a friendly game with the Royal Fusiliers from Cavan returning to Fivemiletown.
A couple of months earlier the Fusiliers were by far the better team, but on this occasion, it was Fivemiletown who were the stronger. It was a fast and exciting game on a very sloppy pitch; the home team scored twice in the first half and bagged another three in quick succession in the final fifteen minutes.
It was also reported that on the same day, Fivemiletown 2nd XI played host to Maguiresbridge lily Whites in a friendly encounter, and after an interesting game the Town came out winners by one goal to nil.

The next encounter was with Enniskillen Celtic in a game played at Fivemiletown in the Mercer cup, Celtic came out the winners by five goals to four. This was most likely a really good game to watch with nine goals being scored but unfortunately, no one thought to write to the papers about it. 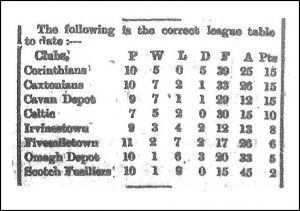 Into February and Omagh Depot scratched (FTF) to Fivemiletown in the mercer cup.

The next mention I find is a note saying Fivemiletown scratched to Irvinestown again in the Mercer cup.

The final mention of a league game I can find was a game involving the Corinthians, this time at Fivemiletown, the game was well contested witnessed by a large crowd. Corinthians went on to win two goals to one.

The only other football I could find involving Fivemiletown was on Easter Monday, when;
‘The principal attraction to holiday makers was the series of football matches, organised by the local football team, who offered a special cup for the competition.’
Unfortunately, the weather was against them and only two games seem to have been played, Fivemiletown beat Brookeborough Defenders 4 – 0, and Ballygawley beat Tempo Freebooters 4 – 1,
The final for the cup was postponed, I was unable to find anything else referencing to this competition.

Not quite sure what to say about this article! 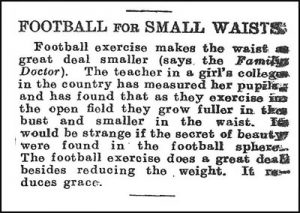