Over the summer of 1901, there must have been some talk about the quality of the Clogher team because in the Impartial Reporter it said that Fivemiletown had better 'look out' as Clogher was the team to be beaten.

Fivemiletown Football Clubs AGM was held in the ‘Red House’ with the following officers re-elected;
Patron: Mr H de F Montgomery, President: Mr M T Coulter (Northern Bank), Captain: Mr S Breadon, Secretary and Treasurer: Mr P Roche with the addition of J McKenna, J Martin, W Gillespie, W Sloan.
Thanks were given to Mr Montgomery for the kind use of part of his demesne for practice and matches.

The first game I found wasn’t until well into November when The Inniskilling Fusiliers came to Fivemiletown. The weather was cold but a good day for sport, the game, for the most part, was in the soldier’s territory. Martin for Fivemiletown scoring the only goal.

The only other mention I can find before Christmas was a youth game played in Fivemiletown between Fivemiletown Boy’s School and Maguiresbridge Junior football club.
the game was watched with interest by a large crowd of spectators, the report said ‘the visitors though good players individually lacked the combination displayed by the home team and consequently received a very severe drubbing of eight goals to nil’

The issue of the Impartial Reporter dated 2nd January reported:
‘The Fivemiletown football club did remarkably well on St Stephens Day. The Depot football club from Omagh met the local club and after a hard match came off second best, being defeated by nine goals to nil. Great credit is due to the Fivemiletown ‘boys’ on their victory, for the combination and tact displayed in the way in which they attacked their opponents’

The same paper reported on another game that day, Enniskillen Juniors playing a Fivemiletown Juniors which resulted in a draw of two goals each.

There was another junior game played a few days later this time away to Clogher juniors, played in wretched weather, 0-0

The end of January seen Tempo football club visit the town with the Fermanagh Times reporting ‘The roughness at the outset was not initiated by the local eleven, who endeavoured to play as smoothly as possible.’
The game finished 2-0 to Fivemiletown

A snippet from the Impartial Reporter: 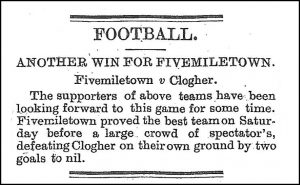 The Visitors, after the match, were hospitably entertained in Mr Hall’s Commercial Hotel.

So much for Clogher being the team to beat. 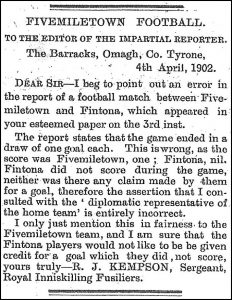 Fintona travelled to Fivemiletown on Easter Monday and the Impartial Reported said it was a fairly even game resulting in a draw 1-1 with the referee being Sergeant Kempson, Royal Inniskilling Fusiliers, Omagh. But the following week a letter was published regarding that game;

Manchester United Football Club is formed by John Henry Davies in a name change from Newton Heath, the former name of the Football League Second Division club that he recently saved from going out of business. 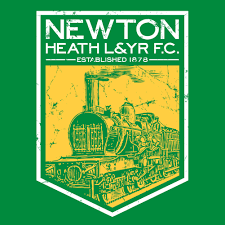