Clones 0-3 Fivemiletown
In the first round of this year’s Coffey cup the crowd witnessed a game of good clean game football. In the first 15 minutes Clones pushed hard but were unlucky in their shooting, and it was T. Morrow who opened the scoring for Fivemiletown. Clones kept pressing but Fivemiletown stood firm. The second half, Fivemiletown carried out ‘some very fine movements’ from which J. McNulty and J. McCaffrey scored.
The report also said, ‘S. Taylor, manager of Fivemiletown team, is to be congratulated in his coaching and fielding such a strong team.’
This is the first time, the term ‘Manager’ has been associated with Fivemiletown, up until this point only the captain has been mentioned. 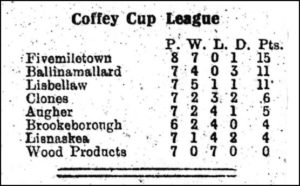 After a ‘Fast and interesting game’ Fivemiletown ran out victors.

Ballinamallard 2-2 Fivemiletown
The next report on the Coffey cup was the final held in Lisnaskea at the beginning of October.
'It was a game of mixed fortunes, with Fivemiletown battling from practically the start to overcome a two-goal lead which Ballinamallard had secured in the early stages. That they did overcome this handicap is all to their credit, but Ballinamallard with a two goal advantage, should have had the game ‘in their pocket’.
In the first half Ballinamallard clearly were the better team, but Fivemiletown now came more into the picture. They were unlucky on a number of occasions, particularly a few good efforts by Joe McNulty that deserved a better fate. With only 15 minutes remaining Fivemiletown were awarded another penalty (W. O’Malley missing one in the first half) this time Tommy Morrow made no mistake. The Valley men fought hard for the equaliser, which came right on the final whistle, when Alcorn headed home from a corner.
Extra time was not played and so a keenly contested game resulted in a draw of two goals each.

McCabe Cup
Semi-Final first leg
Fivemiletown 3-0 Enniskillen United
This tie attracted one of the biggest crowds of the season to the Fivemiletown grounds.
They saw Fivemiletown gain a well merited victory in a game which, ‘though the football was not of the highest standard, contained plenty of excitement and which was keenly contested.’
The Fivemiletown supporters got a chance to show their delight, when, 'after about 15 minutes play, Alan Alcorn headed home from a corner kick taken by T. Morrow, what jubilation!’  T. Morrow added two more goals in the second half.
Enniskillen United were awarded a penalty late in the game, but Foy made a great save, who was in fine form in the Fivemiletown goal.

Semi-final second leg
Enniskillen 1-0 Fivemiletown
Played in a downpour of rain throughout, this return match at Enniskillen on a Tuesday evening attracted a large attendance, despite the inclement weather.
the only goal of the game was scored just after the start from a free kick.
The match was not played to a finish as one of United’s players was ordered off the field but declined to go, and consequently no further play took place. with Fivemiletown winning the first leg by three clear goals, the result as it stood was, Fivemiletown 3- 1 Enniskillen United. 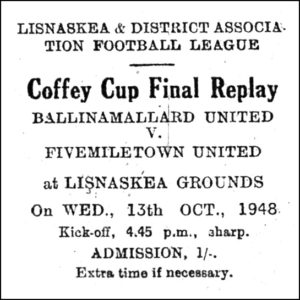 Coffey Cup
Final replay
Ballinamallard 0-1 Fivemiletown
‘Fivemiletown Football Club have won two cups – the Owen McCabe and the Coffey Cup.
In Lisnaskea they beat Ballinamallard by one goal to nil, scored from a penalty, and there were scenes of jubilation in Fivemiletown that night when the cup winners returned home.
Fivemiletown were to have met Carrickmacross, at Clones, in the final of the McCabe Cup, but as Carrickmacross refused to play at Clones, the final fell through and the trophy was awarded to Fivemiletown, who in order not to disappoint the spectators, they played Clones United, the game finished in a draw of one goal apiece.

Interesting snippet
In August, Fivemiletown held their annual horse show and gymkhana, in the report there is a long list of prizes and prize winners, one of the cups to be won was the ‘Football Club Cup’ won by Miss D. Harris, Belfast. 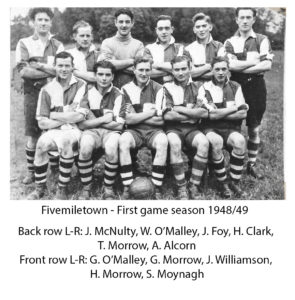 Mercer Cup
Fivemiletown 3-0 Enniskillen Y.M.C.A.
The first mention of Fivemiletown in connection with the Mercer Cup was in late November 1948, unfortunately no information on the game.