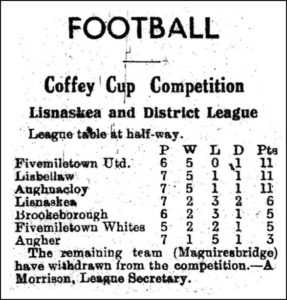 Coffey Cup
Eight teams have entered this year’s Coffey Cup competition in Lisnaskea.
Brookeborough, Lisnaskea, Augher, Lisbellaw, Aughnacloy, Maguiresbridge,
Fivemiletown Whites and Fivemiletown United.
This is the first reference I have seen with a Fivemiletown team using the name ‘United’

Fivemiletown 3-4 Aughnacloy
‘Aughnacloy Rovers defeated Fivemiletown (Not sure which team) in what was one of the most keenly contested matches in the Lisnaskea and District League.’

That’s the last set of results I found, but I do know Lisbellaw went on to take the trophy. 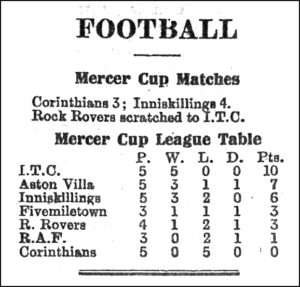 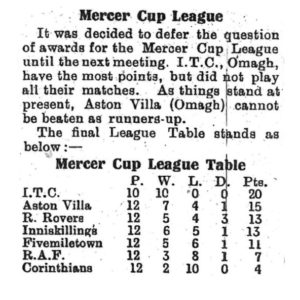 Final Standings,
I’m not sure this is correct, how can I.T.C. have two games remaining, yet all other teams have completed their fixtures!

Final
R.A.F. Castle Archdale 3-2 Fivemiletown (aet)
The report said:
‘Helped by the vocal support of many hundreds of fans who travelled from Fivemiletown, Maguiresbridge and surrounding districts, Fivemiletown were unlucky to lose in the final.’