Fivemiletown Players
The first mention of Fivemiletown Football Club this season, or at least players of the club, was a match held at the beginning of summer, when a game between the Fermanagh and Western Football Association and the North of Ireland Combination, Belfast, which took place on the Broadmeadow, Enniskillen. I don’t have a complete list of players chosen to represent the Fermanagh and Western, but two Fivemiletown players were mentioned in the report, firstly Breadon had to go off in the first few minutes with ‘a severe ankle injury’ and secondly, O’Malley who scored the only goal in an easy victory for the visitors.

I never found any mention of any summer leagues this year.

Club Meeting
The next mention wasn’t until September when a meeting of the club took place; the report only said that they would enter the Mercer Cup and other competitions this coming season. It also stated the Reggie Boyd was appointed club Secretary.

Mercer Cup
Fivemiletown 2-1 Omagh Depot
Fivemiletown fielded a number of juniors, two of whom in the junior XI, F O’Malley and P Hackett, acquitted themselves admirably. The work of the former in the Fivemiletown goal gained many well-dissevered tributes. On numerous occasions, he stood between his team and defeat.
The match was of an exhilarating nature, with never a dreary moment during the entire 90 minutes.
It was Omagh Depot that opened the scoring, a high shot giving the home keeper no chance. This was a lucky break for the visitors.
Fivemiletown did not take kindly to being in arrears and pushed hard for the equaliser before the break, their pressure paid off when Breadon, from a free kick on 18 yards, put the ball in the net.
Omagh Depot pressed severely for the lead, but O’Malley pulled off several outstanding saves to deny the visitors forwards. It was R O’Malley who started the move for the winning goal, and good exchanges by Graham and Bates to put in a cross for R Boyd to head home.
‘What the homesters lacked in weight was counter-acted by an extent by their keenness to pull through and their determination was rewarded in the end, the homesters deserve every congratulation’s on their win’.

Enniskillen Celtic 3-0 Fivemiletown
Celtic had most of the running in this match, but Torrens in defence and O’Malley in goal made it very difficult for Celtic.

Irish Junior Cup R1
Fivemiletown 2-1 Shelbourne
Despite the very bad weather, both teams enjoyed good support from the touchline.
Play went in favour of the visitors in the early stages of the first half, but their attack was weak, and only by sheer luck they found themselves a goal to the good, after a melee, Torrens had the misfortune to deflect past his own goalie, and moments later Breadon fail with a penalty to level the score with the visiting keeper making a brilliant save. It wasn’t until the final 10 minutes that Fivemiletown equalised, Torrens making a run from defence and firing a high ball up to R O’Malley to head home, and further pressure was rewarded as Boyd netted from a Graham cross to win the game. Mercer Cup
Fivemiletown 3-6 Corinthians
The game was fought at a fast pace throughout, there were plenty of thrills and the football was good. The scoreline looks very one-sided, but in fact, it was an evenly matched encounter.
Corinthians scoring first from a fumble by the home keeper, then Carruth equalised with a terrific shot, Corinthians then regained the lead but not long after Fivemiletown were back level from a good bit of skill by R Boyd. Shortly after the restart, Fivemiletown took the lead for the first time in the game, when the Corinthians defence let the ball go back to their keeper, Breadon nipped in to score. In the final stages of the game, Hyland, the Corinthians forward, scored 4 goals (5 in total).
Fivemiletown had their chances and will feel hurt at the final scoreline. Irish Junior Cup R2
Fivemiletown 3-4 Enniskillen Celtic
The first thirty minutes favoured Celtic and the report mentioned the fine goalkeeping of F O’Malley who ‘effected some clever saves’ but Celtic managed to score first, shortly before the break, Breadon had a great effort cleared only for the ball to fall to his feet again and this time he made no mistake to level the score at the interval.
Fivemiletown’s luck seemed to be out when Celtic was awarded a penalty for handball, making it 1-2, and a few minutes later they scored again 1-3, but Fivemiletown kept fighting, Breadon managed to grab a goal to keep Fivemiletown in the tie, and with only two minutes left of play, Taylor took the ball through the Celtic defence and made a nice pass to Breadon who slammed the ball home to complete his hat-trick and obtain the equaliser. The final whistle went with the score level on three goals apiece. Extra time was played and it was evident that the pace had begun to tell on the players of both sides. It was in the final minutes that Celtic managed to scramble home the winning goal.
Fivemiletown: F O’Malley, Carruth, Torrens, Shields, Taylor, Porter, Graham, R O’Malley, Breadon, Reginald Boyd and Robert Boyd. 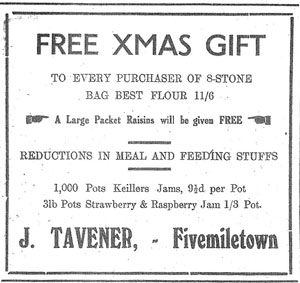 Score!
In December I found a short report stating;
‘Fivemiletown travelled to Omagh when they lost to Omagh Military Depot in the Mercer Cup’
Unfortunately, they forgot to mention the final score.

Finally
The only mention I have found to date in the early part of 1935 was a meeting of the Fermanagh and Western where they awarded the points to Corinthians after Fivemiletown were unable to field a team.

Silver Jubilee Celebrations
His Majesty King George V and Her Majesty Queen Mary
6th May to 12th May 1935
A number of memorable events marked the Royal Silver Jubilee in Fivemiletown.
The whole town was decorated with flags and bunting in honour of the occasion which was observed as a public holiday.
Portadown Crusaders
In the afternoon a well-contested football match took place between the local team and Portadown Crusaders, with the Crusaders winning by five goals to three.
Tea Party
This was followed by tea for 250 school children, where each child was presented with a Jubilee mug decorated with a portrait of the King and Queen.
Bonfire
That evening there was a parade through the town on their way to the station where a special train had been laid on to take people to Ballagh of the Fivemiletown Boy Scouts and British legion accompanied by the Fivemiletown Silver and Pipe bands, where a large bonfire was lit, it was so fierce it could clearly be seen by other beacons in Fermanagh and Omagh. There were also bonfire’s at Aughentaine, Cooneen and Clabby.