Summer Friendlies
May 1932 Brookeborough played their first match of the summer season against Fivemiletown on the home ground, the visitors winning by two goals to one.

A couple of weeks later, Brookeborough travelled to Fivemiletown for a game on the Recreation Ground before a large crowd. Breadon (2) and McNulty were early scorers for Fivemiletown.
In the second half, the visitors' defence was stronger but had the misfortune to put the ball into their own net. Fivemiletown 4-0 Brookeborough


At the end of June, Lisbellaw travelled to take on Fivemiletown, this was an Inter-League match, but similar to last year, it never mentioned which leagues, midway through the first half Graham scored for Fivemiletown and that’s the way it stayed until two minutes before time when Lisbellaw equalized. The report also said ‘there was a big attendance of spectators’.

Charity Match
The team of the old internationals from Belfast visited Fivemiletown on the 3rd August to play a strongly selected team from the local district in a benefit match in aid of the Tyrone County Hospital.
Major-General Montgomery kicked off before a large crowd of spectators.
The locals were the first to score, amid great cheers, Morrison (Glentoran) then equalized and later Croft (Glentoran) headed in number two. The locals then equalized and a few minutes later scored their third. G. Pollock (Linfield) placed the visitors on level terms. Halftime 3-3.
The second half was keenly contested but no further scoring took place, the game ending in a draw of three goals apiece. After the match, the visitors were entertained to tea and a concert. A crowded hall was seen at the Legion Club, where a dance was held. Afterwards, the visitors drove off amid the singing of Auld Lang Syne. A big crowd was attracted to a challenge match between Fivemiletown and Brookeborough on the latter’s ground, the home side won by two goals to one.

Married V. Singles
Exciting Fivemiletown Match
‘The annual football match, married versus singles, at Fivemiletown, while not producing spectacular football, always arouses great interest and amongst the spectators may be seen mothers, wives, daughters, sisters and sweethearts who cheered lustily at times. The match was played on the Recreation Ground under a beautiful sunset and played in a sporting spirit and the best of humour prevailed throughout on both sides.’
The married was - Rodgers, Tavener, Vaughan, Belford, Priestly, Irwin, Rea, McGeary, Morrison, T. Morrison and Hawkins.
The singles were - Montgomery, Lavelle, Hackett, McGurk, R. O’Malley, Graham, Mulligan, W. O’Malley, Breadon, Bennock and W. Slone.
The game ended in a draw of five goals each.
Two weeks later there was a rematch, this time the married beat the singles by six goals to four.

Lisbellaw came to Fivemiletown for a match, although it was raining heavily for the entire game it was the visitors who had the better of the play, winning the game two goals to one, Caruth scoring a penalty for Fivemiletown. Brookeborough Summer League
Fivemiletown 3-0 Brookeborough
Right from the start the home team pressed, and after ten minutes play were awarded a penalty, Breadon making no mistake with the spot kick, Brookeborough tried hard for the equalizer, but the home defence was sound, and after twenty minutes Boyd added the second, Play continued fast and lively. After the interval, Fivemiletown set a very fast pace, thrilling the spectators. Carruth scored the final goal for Fivemiletown, for the final twenty minutes Fivemiletown completely hemmed in the visitors and were unlucky not to score a hand full more. Mercer Cup
Corinthians 3-1 Fivemiletown
The end of September saw the League start, and Fivemiletown travelled to Enniskillen for their first game. The opening exchanges favoured Corinthians, but Fivemiletown soon settled into the game. Despite the fact, Fivemiletown had a large share of the play it was Corinthians that scored first.
The second half was only a few minutes old when Corinthians scored their second, Fivemiletown managed to get back into the match with a goal scored by Fenton, but Corinthians put the game in no doubt adding a third.
Fivemiletown: Beacom, W. Caruth, Torrens, Shields, O’Malley, Kingsbury, Slone, Moore, Breadon, Boyd and Fenton. Brookeborough Summer League
Old Crocks 0-4 Fivemiletown
Fivemiletown scorers: Breadon (2), O’Malley and Fenton. Mercer Cup
Fivemiletown 0-3 Dromore
All three of the visitor’s goals came in the last ten minutes, the report said Dromore were fitter and ’being in much better training than Fivemiletown’ it went on to give their thoughts on each player: ‘The defence, Jameson, Torrens, W. Caruth, Kingsbury, O’Malley, Fenton, were untiring workers and made few mistakes. Of the forward line Reggie Boyd did good work, Breadon at centre gave a poor display and has little of the dash of Morrison for whom he deputised owing to the latter’s recent knee injury. Victor Carruth as outside left has not quite recovered from his foot injury and consequently was not so keen as usual. Moore, as usual, a hard worker- but the fates seemed against him. Slone as outside right will have to pluck up courage and make a little more haste to get possession of the ball’ 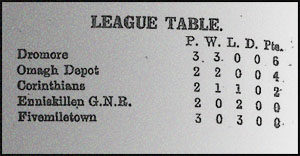 Omagh Depot 8-0 Fivemiletown
The game was very one-sided and Omagh had no difficulty in winning this game.
It never mentioned if Fivemiletown had a full squad, I suspect not.

G.N.R. v Fivemiletown
Fivemiletown was to have played Enniskillen G.N.R. in Ballinamallard but scratched and the points were awarded to G.N.R.

Irish Junior Cup R1
Fivemiletown 5-1 Corinthian
The opening exchanges were evenly contested, but it was Fivemiletown who were the first to score when the ball was crossed from the left to find Boyd who had no trouble heading past the visiting keeper. Fivemiletown went further ahead shortly afterwards when Breadon scored from a penalty and R. Boyd then registered number three. Corinthian then pressed hard but Graham, the Fivemiletown keeper, dealt safely with any shot that came his way.
Early the second half Fivemiletown scored again when the keeper fumbled a cross and Fenton ran in to score, Corinthian were well beaten when J. Boyd slotted in number five, they did manage a consolation goal just before the end.
The report concluded: ‘The conduct of both teams was exemplary – not an unpleasant word being heard throughout the entire match’

The local papers seem to have forgotten that the football season was still going, I failed, to date, to find any other reports on the Mercer Cup, or indeed the Irish Cup, unfortunately, I am unable to inform you of how Fivemiletown faired in the final stages, I do know however that it was Omagh Depot that went on to take the league title this season.

Mulhern Cup S/F
Fivemiletown 3-1 Omagh Depot
Beginning of March, and it was the league champions that travelled to Fivemiletown for this semi-final clash, the Omagh lads were the firm favourites to win this game, but Fivemiletown had other ideas. Play favoured the visitors at the start, but after Torrence, the left back, had cleared, Fenton, outside left, got possession and ran downfield, centred, and B. Boyd, centre-forward, rushed between the defence, round the keeper and opened the scoring. Six minutes later R. Boyd sent in a shot from 15 yards, as the visiting keep came out to save, he slipped and the ball rolled over the line. The report said that ‘A minutes later, R. Boyd broke the crossbar with a shot’.
In the second half, the Depot hemmed the home team in their own half, but Torrence, Carruth and Graham were sound, it was not until 20 minutes remaining that Omagh reduced the lead. The Depot still pressed, and with 10 minutes remaining the home team managed to cross the half-way line. Jim Boyd breaking away, centred, and E. Moore, with a first time shot, landed the ball into the net amidst great cheering from the home spectators. This made the Depot play harder, and within five minutes six corners had been taken, ‘but the shooting of their forwards was weak’ The home team held out to win this cup game.

In the other semi-final, G.N.R. beat Corinthians by two goals to nil.

Mulhern Cup Final
Saturday 1st April 1933
Enniskillen G.N.R 2-1 Fivemiletown
Broad meadow, Enniskillen.
Fivemiletown had the wind to aid them in the first half of the game but missed several good openings. ‘There was a lot of aimless kicking for a period due to the strong wind’, the game had been in progress for half an hour when Fivemiletown, scored in a melee in front of the Railwaymen’s goal.
On resumption, the Railwaymen set up a determined onslaught on Fivemiletown’s goal, and the Tyrone team’s defence was hard pressed, and their persistence paid off with the equaliser.
Fivemiletown now took up the offensive determined to regain the lead. Some exciting football was witnessed, both goals having narrow escapes. Fivemiletown was awarded a penalty, but the keeper saved Donnelly’s spot-kick and from the rebound, Fivemiletown failed to find the net. On the next attack by G.N.R., they managed score; Fivemiletown threw everything at the opposition’s goal desperately looking for the equaliser but the final whistle beat them to it.
Fivemiletown: Taylor, Torrens, Porter, Shields, Donnelly, O’Malley, B. Boyd, Moore, Montgomery, R. Boyd and Fenton.

Mulhern Cup
Fivemiletown Protest
The Impartial Reporter published this short article:
‘As the result of a protest, Fivemiletown Football Club have been awarded the Mulhern Cup and medals. They were defeated by Enniskillen G.N.R. in the final, but Fivemiletown protested on the grounds that the G.N.R. club had played two unregistered players. At a meeting of the Fermanagh and Western Football Association on the 12th inst., the protest was considered and upheld, and it was decided to award the cup and medals to the Fivemiletown team.

Mulhern Cup Presentation
Wednesday 17th May 1933
Recreation Grounds, Fivemiletown.
Mr William Johnston (Enniskillen), Secretary of the Fermanagh and Western Football Association, handed over the cup and medals to Major-General Montgomery, patron of the club, addressing those present, Major-General Montgomery congratulated the club on winning the cup. ‘It was a great achievement for a team from a small place like Fivemiletown to win the cup considering that they were competing against teams from such large towns as Omagh and Enniskillen, where clubs have a much larger field to select their players (applause).
A friendly game was then played against Corinthians ending in a draw 1-1, R. Boyd scoring for Fivemiletown.