In October there was a meeting in the ‘Red House’ for the purpose of starting a football club for the new season, Dr W E Blakeley was in the chair, and the following were appointed -
President – Dr Blakeley
Treasurer – Constable Thomas Kemp
Secretary – Mr W Gillespie
and a committee of four members was appointed.

The first game I came across this season was in late November in a match played in Clogher against Clogher Stars, ‘before a fair crowd’ it seems this game was pretty much one sided with Clogher being the stronger winning be 4 goals to nil
In the end notes, it said “Fivemiletown – McLaughlin played splendidly in goal although beaten four times, the backs were weak, Patton being the best, half’s about equal, forwards bad and know nothing of shooting excepting Gillespie who played well but got no help”

Lisnaskea came to Fivemiletown in early December with the game kicking off at 2pm on a Wednesday afternoon, it doesn’t say if there is a crowd watching but it does seem an odd day and time to be having a friendly football match.
Fivemiletown won the game 2-0 but it did report that ‘Lisnaskea made some splendid play and deserved praise’
Up-Date:
New workers’ rights were just coming into effect at this time, one of them was for retail staff to get more free time, so the introduction of  ‘half day closing on a Wednesday.’

The following Wednesday a match played in Fivemiletown was reported to be against Clogher Stripes, it says that the Stripes defeated Fivemiletown recently by four goals to nil.
I am not sure if I have missed a game or the reporter got the name of the team wrong but the last game against a Clogher team where we lost 4-0 was against Clogher Stars not Stripes.
Playing for Fivemiletown were; Seallan, Patton, Roache, Callaghan, Breadon, Doogan, Falls, McKenna, Gillespie, Sloan and Roddy.
I get the impression the report was written by a Clogher supporter firstly he said the Fivemiletown ground was in a very bad condition then went on to say ‘the homesters adhered purely to defensive tactics otherwise the Stripes would have surely run up a good score’ he also said the ‘homesters never got over half ground’ and he finished with a dig at the players ‘Fivemiletown were all too course, going for the man rather than the ball’ the game finished 0-0 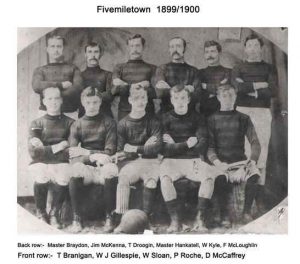 The earliest photo there is of Fivemiletown Football Club

On Boxing Day it was reported that ‘a large crowd of people visited the town from all parts of the district. Bands were in attendance and discoursed a selection of airs through the town.
The crowds began to gradually swell, most of the people coming for the football match.’

It was a game between Fivemiletown and Fintona. Fivemiletown winning 3-0.
In the Tyrone Constitution, it was reported that ‘the Fintona boys played a very nice game indeed no rough play being credited to them‘ but It went on to say,
‘The home forwards played very roughly, especially W Gillespie, who made very bad play. He might have played better had he not kept the leather so much to himself for the sake of a show off.’

But in the Impartial Reporter writing about the same game, it said, ‘It was one of the nicest games played at Fivemiletown for some time and was appreciated very much by a large crowd of spectators.’
Two different views, something that is still commonplace today.

Around two weeks later Fivemiletown travelled to Fintona in a friendly match as a return for their Christmas visit. ‘The home team were in splendid form’  it was reported, and that Fintona ‘succeeded in defeating their youthful rivals to the record tune of fourteen goals to nil’
it never reported on who was playing but the word youthful makes me think this team might have been made up of local boys rather than the usual players.

In February 1900 the Impartial Reporter reported on a game between Lisnaskea Reds and Fivemiletown Greens, I am fairly sure neither of these two clubs are new so why they had Red & Green added is anyone’s guess.
The game took place on the Prairie at Lisnaskea in front of a large crowd, the report submitted to the paper seemed very one sided and made out the ‘Greens’ hardly touched the ball let alone had any chances, the game finished 1-0 to the ‘Reds’
At the end of the report, it said ‘The home team played well without exception and is undoubtedly the best combination in the county’

The following week Aughnacloy paid a visit to Fivemiletown this time it was the home team who dished out a bit of a thumping with Fivemiletown putting thirteen passed Aughnacloy without reply,
the report said the home keeper only kicked the ball once during the whole game and W Gillespie scoring most, it went on to say ‘the visitors played a very nice game, and had it not been for their able goal-keeper the score would have been much larger.’
With the visiting players being entertained in ‘the Red House’

The end of March a match of ‘considerable interest’ was played on the Fivemiletown grounds between Fivemiletown second XI and Fivemiletown School team in front of a large crowd of spectators. The ground was in good condition and the game, which was a very fast one, was well contested.
The game finished 3-0 to the School team.

The final game I can find this season is a match where Clogher paid a visit to Fivemiletown.
The Fivemiletown team consisted of; Goal, McCoy; Backs, Roche, Sloan; Half-Backs, Droogan, McGahey and Walker; Forwards, Martin, Gillespie, W Gillespie, A Roche and Roddy.
with Fivemiletown winning 2-1
The report is not clear on which team or even if it’s both teams they are talking about when it said ‘In balance, I think, would be more at home in a boxing ring. But I am afraid they would not listen to the referee or the rules either. However, I hope we will see them with a better style of football next season.’ 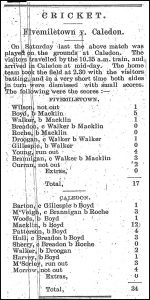 In April 1900 I found a report where a meeting was held in the courthouse Fivemiletown for the purpose of organising a Cricket Club. Praise was given to H de F Montgomery in giving his field for the use of the football club and now giving it for the use of the cricket club.

In March 1900 there was a concert and cinematograph exhibition held in the school house. Mr Montgomery D.L Blessingbourne considered the cinematograph along with the gramophone two of the most wonderful machines of modern times. If he could see what’s around today, it would blow his mind.