The earliest match I can find involving Fivemiletown happened on Thursday 5th January 1888 when ‘Great excitement was caused’ with Aughervoury football club visiting the town.

The match was played under association rules in a field adjoining the town from 3 - 4:30 and according to the report there were ‘Hundreds of spectators’ present
with H de F Montgomery, Esq (Blessingbourne) and the Rev E F Naylor as umpires. 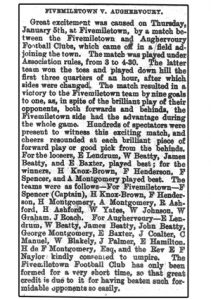 It’s hard to know what condition the field (pitch) was in but it couldn’t have been anything like today, I would imagine that today’s referees would call the game off for health & safety reasons, there is no mention if the pitch is lined but then again all it needed was a line around the edge and a centre spot.

Aughervoury won the toss and ‘played downhill’ another thing you don’t see nowadays.
an interesting part of this report was in the last paragraph when it say’s ‘The Fivemiletown football club has only been formed for a short time’ but after searching back 6 months into 1887 I cannot find any mention of Fivemiletown so must assume the club was started over the Christmas or New Year period. It also said Fivemiletown were playing ‘such formidable opponents’ in Aughervoury but I failed in find any reference to them either.

And in the same paper, it says a few days later on Monday 9th Fivemiletown was back in action in the same field with their opponents Augher arriving on the 12 O’clock train.
‘Tremendous cheers resounded’ from the crowd that had ‘gathered in from all parts’, this match seems to have been advertised for several days prior to the game, Fivemiletown won 2 – 0 a game they were not expected to win against the renowned Augher players, the game was a great success and ‘Fivemiletown was a scene of great rejoicing’
Mr Montgomery (I presume H de F Montgomery) kindly provided a ‘grand dinner’ at the hotel for both teams, The Augher team returned by the 3:30 train amid ‘loud cheering’

This report also says; “We believe no club ever succeeded so well at its outset as the Fivemiletown Football Club” high praise you must agree.

It also mentions the fact the club will have to be given up for some time in the coming weeks but you will see this wasn’t to be.

In February this year, there was a concert in ‘Connection with Fivemiletown football club’ with singing, piano solos and readings, with the Montgomery family taking centre stage.

April and the Fermanagh Times reported on a match between Fivemiletown & Clones which was held at the ‘Fivemiletown football ground’ which was most likely a field, it also stated ‘The match was, throughout, a great success, being free from any useless disputes.’
Arguments and disagreements were commonplace at this time, resulting in some teams just walking off the pitch and this happened for many years.

In November this year, the Impartial Reporter reported on a match between Fivemiletown and Caledon Hibernians played in Fivemiletown,
When the home team scored their second goal and centre was about to be taken the referee blew his whistle and announced “no goal, it’s a corner kick” but the umpires overruled him and allowed the goal, but; ‘The home team not wishing to have anything but a friendly game, consented to the referee, at the same time informing him that in future he would not be allowed to interfere with the agreeable decision of the umpires’

Fivemiletown has been busy this last year with games against Colebrooke, Aughavoory, Tempo and again against Clones and Ballygawley even the schools were getting in on the sport with the papers reporting on a game in Clogher between Clogher School and Fivemiletown school.

In August the new committee was announced for the coming season: 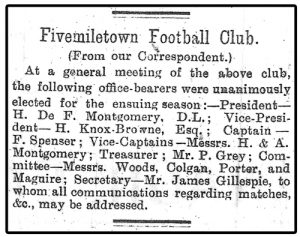 At the start of 1889, I was only able to find 2 references to Fivemiletown Football Club.

The first stirred up a little bit of controversy.
Fivemiletown travelled to Tempo to take on Tempo Jubilee FC at the start of January and after the game, both teams sent a match report into the Fermanagh Times and both were published a few days later. The game was at 2 - 3 in favour of Fivemiletown with full-time beckoning.

The first report, presumably from the Fivemiletown contingent, stated that
“The Fivemiletown Timekeeper who had been keeping time very carefully now wished to call time; but the referee who was keeping time for Tempo said there were four minutes more before time, during the dispute Tempo by a rush, scored their third goal, which Fivemiletown would not allow. Thus the match ended – Fivemiletown 3, to Tempo two, plus one disputed”

The other report from the Tempo Jubilee Secretary said
“Tempo appeared at this point to play a loose game, but, hearing that the time was nearly elapsed, they determined not to be beaten, and ‘where there is a will there is a way’ was strikingly illustrated in the scoring of the third and last goal for Tempo. Time was immediately afterwards called, leaving the result – Fivemiletown 3 goals; Tempo 3 goals”

It didn’t end there, Mr Thomas Todd, Secretary, Tempo Jubilee FC took offence at the accusation the referee was keeping time for Tempo and wrote a strongly worded letter to the Fermanagh Times which was duly published, he ended the letter by saying;
“If the Fivemiletown Club think that they have been unfairly treated, I challenge them to play the match over again on any ground – Fivemiletown and Tempo excepted, and let the referee be appointed by mutual consent”

I didn’t find any response from Fivemiletown or indeed any report of the challenge being excepted, not this season anyway.

On Easter Monday Fivemiletown hosted an Athletics Sports event part of which included a football match when Fivemiletown welcomed the Kings Royal Rifles for a game and the papers reported ‘Attendance was very large’
the Rifles winning with three quick goals in the second half and only the one goal in reply.

You will notice the entrance to the football match was two pence, which in today’s money is just over £3.

And finally, for this season a little snippet showing how things were done back then,
obviously, the magic sponge had yet to be invented.