AGM
The general meeting of Fivemiletown Comrades Football club was held in mid-September 1921 with Mr Breadon presiding. The Secretary and Treasurer, Mr R. S. Tavener, then read the report for last year which was found very satisfactory and was adopted. Officers were then elected.

The first game for Fivemiletown this season was in fact round one of the Irish Junior Cup, It was an away trip to Irvinestown.
Fivemiletown started the stronger of the two sides and it wasn’t long before Rooney scored putting Fivemiletown in the lead with a well-taken goal. Irvinestown then pushed hard and a with some good play managed to equalise, the home side again attacked and although Breadon (Fivemiletown keeper) to have made a brilliant save the referee still awarded a goal, halftime score Irvinestown 2-1 Fivemiletown
In the second half, the visitors dominated the game and Breadon did not handle the ball once. It was Morrison who finally scored the equaliser after some fine saves from the home keeper, a penalty from Dickie put the visitors ahead and it was the same player who put the issue beyond doubt a few minutes before the whistle.

The draw for round two sees Fivemiletown get a home tie against the Corinthians.
Corinthians started the brighter scoring within the first few minutes, and again ten minutes later, but Fivemiletown got back into the tie with a goal from Dickie just on halftime.
Corinthians regained their two goal advantage shortly after the restart. Fivemiletown didn’t let their heads drop and with a quick break, Cameron smashed it past the visiting keeper and shortly after Morrison registered number three levelling the score, that’s how it finished after the 90 minutes.
Ten minutes were then played each way but neither team could find the net, so it will go to a replay.

R2 Replay
Somewhere between Nov 10th-24th, Fivemiletown lost the replay, but I was unable to find any information on the score, Corinthians went on to meet Omagh Wanderers in Round 3.

The only information I can find regarding Fivemiletown's, Mercer Cup challenge this season, was a few results, I couldn't find anything on players names or scorers:
Omagh wanderers 4-1 Fivemiletown Comrades
Fivemiletown Comrades 3-3 Irvinestown Wanderers
Fivemiletown Comrades 2-2 Omagh Wanderers
Irvinestown Wanderers 3-0 Fivemiletown Comrades
The above matches all took place in October & November. Postponed
I found a few lines reporting that the game between the Corinthians and Fivemiletown will be postponed due to players from both clubs intending to travel to Belfast to watch the international between England and Ireland.
According to 11v11.com:
the game took place at Windsor Park, Belfast
Attendance 30,000
The game ended in a 1-1 draw.         Christmas Football
Over Christmas, R.I(S.)C. stationed in Enniskillen, ‘journeyed on two motor tenders to the field of play in Fivemiletown.’ It was reported a good number of spectators turned out to watch the game which was evenly contested.
Fivemiletown was successful, winning by three goals to two. Afterwards, the visiting team were entertained in Beatty’s Hotel. Royal Field Artillery 3-4 Fivemiletown Comrades.
The report said: ‘A football match between the Royal Field Artillery, Enniskillen, and Fivemiletown, in the first round of the Mercer Cup Competition resulted in a win for Fivemiletown by four goals to three.’  Don't think the report is accurate when it says 'the first round' as this report wasn't in the papers until February. 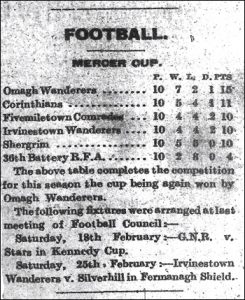 The only other mention of the Mercer League was the final standings of the season and that was dated Feb 16th, 1922.

Whist Drive
A couple of weeks later the Fermanagh Times reported;
‘A very successful whist drive and dance was held in the Comrades Hall in connection with the local football club. There was a large gathering present, music was supplied by Miss Violet Montgomery and Miss Ethel Montgomery with refreshments served at midnight.’ Military in Fivemiletown
There was over 100 men from the Lincolnshire regiment stationed in Fivemiletown around this time, and it wasn’t long until a friendly football match was organised. The game proved exciting. The final whistle went with a draw of three goals each. Mr Samuel Breadon, Vice-President of the club acted as referee.

Empire day
On the 25th March 1922, to celebrate Empire day, a football match was held between teams representing the town and the Lincolnshire Regiment.
There was a very large crowd of interested spectators.
A keen game resulted in a win for the home side by one goal to nil.
The report finished with; ‘Rea being responsible for the lucky point’